The Boys & Girls Club of Truckee Meadows in Reno, Nevada hosted a New Year’s Eve party for its teen members to attend. The party was at the DWR facility on East 9th Street. Teens from all of the other four teen centers were invited and encouraged to come ring in the new year with the Club. The Keystone club planned the event and was in charge of inviting other members. Having this party helped teens have something positive to do during New Year’s Eve and not be out on the streets getting in trouble.

The Club had a variety of activities to do for the party. Movies and popped corn started out the night. The gym was also open for most of the night for members who wanted to play basketball, volleyball or soccer. Teens were hanging out, talking with their friends, playing games and having a great time. The Club went all out with a nacho bar that had all of the fixings. Members got to select from ground beef, beans, sour cream, cheese, hot sauce, and salsa to top their nachos with. To round out the meal we had ice creams cones and got to pick from five different flavors of ice cream! The rec room was open the entire time and teens were able to play pool, ping pong and foosball.

We rang in the year by toasting glasses of sparkling apple cider as the ball dropped. It was awesome to ring in the New Year with the 42 teen members who attended the party. After the party was over and everything was cleaned up, staff gave all of the members a ride home. It was a fun party that helped teens stay engaged in their teen center and gave them something to do. DWR definitely started out 2016 the right way!! 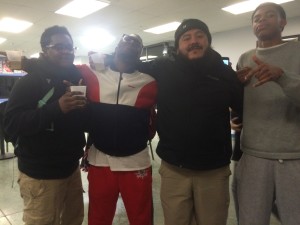